Shopping center space development is focused in China, according to the latest Global Viewpoint from CBRE Research.

“The scale of new development in Asia and China in particular is staggering but there are a number of quite understandable factors behind it. The most reported is economic growth, which continues, although now with some signs of slowing down," said Sebastian Skiff, Executive Director of CBRE Retail.

"Chinese cities, and many others in Asia, also present a physical environment that lends itself to environment controlled shopping centers. Outdoor shopping can be too hot, too humid, too cold, too wet, too unsafe or too dirty and polluted—modern shopping centers are none of these when managed properly," he added.

Other factors include higher urban densities of people who rely mostly on public transportation, and cities that are not too old to have large-scale historical commercial architecture and must-keep streets like Regent Street in London or the Champs Elysee in Paris. Skiff said this means numerous opportunities to build new modern facilities right where the people are living, connected by mass public transport systems, unrestricted by what has gone before.

"This urban population do not drive to neighborhood shopping strips as they do in the West and therefore the best, most efficient, model for providing diversified shopping requirements under one roof in an environmentally controlled manner around a public transport hubs comes in the form of the shopping center,” he explained.

Southeast Asia has 3.3 million sq. m. under construction and nearly 40 percent of this is located in Kuala Lumpur. The Malaysian capital is the 11th most active market globally. In Vietnam, Ho Chi Minh City and Hanoi have also seen a large number of new developments in suburban areas and are seeing strong leasing demand from retailers attracted by lower rents and the lower-to-mid income residences nearby.

India likewise continues to see a wave of new shopping center development despite some developers pushing back completion dates due to financing issues. Around 500,000 square metres of new retail space are under construction in New Delhi. The largest two projects, DLF Mall of India NOIDA (204,385 square metres) and Logix City Center Mall (111,483 square metres), are both located in Noida. Among tier II cities in India, Hyderabad is the most active market with a current supply pipeline (483,000 square metros) three times greater than its existing stock. 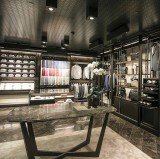 This year, the ranking focuses on global brands, which have registered a rapid growth in 2019 in terms of retail doors, distribution channels, global …